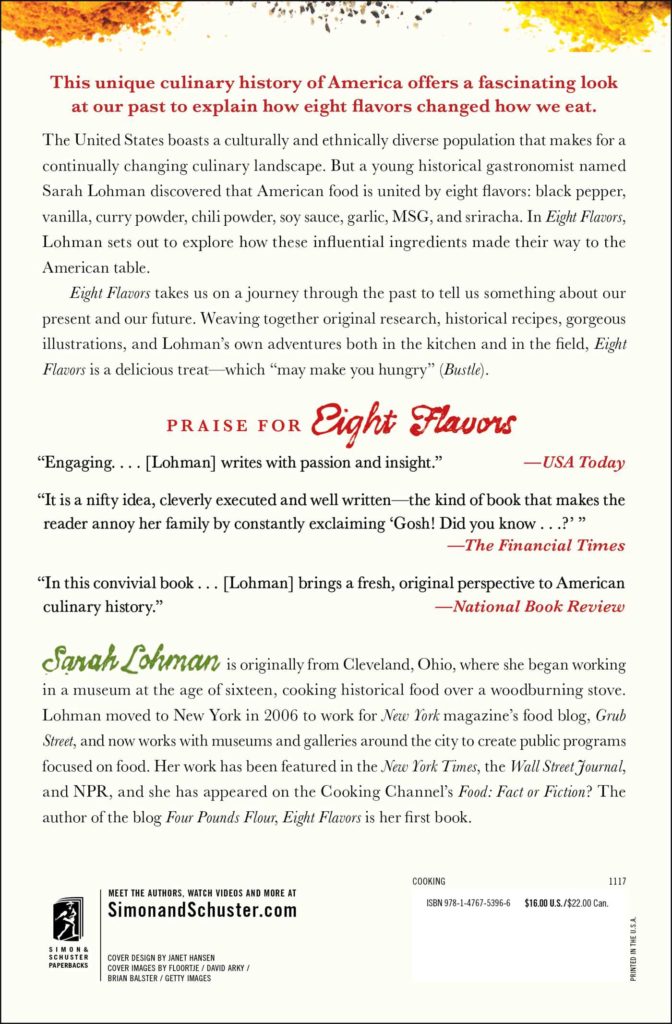 You can buy Eight Flavors: The Untold Story of American Cuisine direct from the publisher, on Amazon, Barnes and Noble, indie bookstores–or anywhere else books are sold! Buy it in Hardcover, Paperback, E-book, and Audio Book.

Released in 2016 with Simon & Schuster, Eight Flavors is a #1 Bestseller on Amazon and The Atlantic called it “Richly researched, intriguing, and cleverly written.” The book received additional praise from the New York Times, USA Today, and NPR, and Lohman made media appearances on NPR, WNYC, Extra Crispy, Eater, AJ+ and many more. Her book even made a cameo in the background of Netflix’s Ugly Delicious.

In “a unique and surprising view of American history…richly researched, intriguing, and elegantly written” (The Atlantic), Lohman sets out to explore how these influential ingredients made their way to the American table.

She begins in the archives, searching through economic, scientific, political, religious, and culinary records. She pores over cookbooks and manuscripts, dating back to the eighteenth century, through modern standards like How to Cook Everything by Mark Bittman. Lohman discovers when each of these eight flavors first appear in American kitchens—then she asks why.

“A fresh, original perspective to American culinary history” (The Christian Science Monitor), Eight Flavors takes you on a journey through the past to tell us something about our present, and our future.

We meet John Crowninshield a New England merchant who traveled to Sumatra in the 1790s in search of black pepper. And Edmond Albius, a twelve-year-old slave who lived on an island off the coast of Madagascar, who discovered the technique still used to pollinate vanilla orchids today. Weaving together original research, historical recipes, gorgeous illustrations, and Lohman’s own adventures both in the kitchen and in the field, Eight Flavors is a delicious treat—which “may make you hungry” (Bustle).

Dishing It Out: Why Americans Eat the Way We Do
by Corby Kummer
New York Times, Jan. 6, 2017
“[Lohman’s] enthusiastic charm and what you sense is genuine Midwestern niceness shine through. She’s also impressively plucky, traveling, for example, to a remote Mexican vanilla plantation. … Lohman is assiduous in tracking down early recipes and describing cooking techniques. She also gets to show off her scientific fluency (she comes from a family of scientists).”

How American Cuisine Became a Melting Pot
The Atlantic, Nov. 23, 2016
“Eight Flavors: The Untold Story of American Cuisine, a new book by Sarah Lohman that unpacks the diverse history of a nation’s palate via eight distinct ingredients. … But almost more fascinating than the countless odd facts Lohman reveals … are the people whose work had a profound impact on the way Americans eat, but whose biographies have been almost completely forgotten.”

‘Eight Flavors’ is Part Travelogue, Part History, and Part Recipe Book
Christian Science Monitor, Dec. 5, 2016
“Lohman’s attention to detail is meticulous, and she presents more than a few intriguing facts about the history and culture of food.”

What’s Eating New York? The secrets of a culinary powerhouse
Financial Times, Dec. 9, 2016
“It is a nifty idea, cleverly executed and well written – the kind of book that makes the reader annoy her family by constantly exclaiming, “Gosh! Did you know…?”

Kebabs are the next hamburgers: how war and immigration predict what we eat
Interview
Washington Post, Dec. 7, 2016

The Spice Curve: From Pepper to Sriracha with Sarah Lohman
Gastropod Podcast
Nov. 29, 2016